How Are Uber and Lyft Working With Public Transportation Authorities?

Over the past year, there’s been a slew of partnerships between public transportation authorities and companies like Uber and Lyft. These are often touted as a win-win for both parties, since on the surface, they seem to make a lot of sense. Uber and Lyft get more riders and public transportation authorities save money and connect more riders to transit hubs solving the vaunted first-last mile problem.

Over the past few months, I’ve spent time tracking all of these partnerships, talking to some of the stakeholders and really trying to understand what these partnerships mean for all parties involved. So today, I’m going to lay out everything I’ve found.

Before we start though, the term partnerships can mean a lot of different things, so I’ve broken it down into three tiers.

The Main Uber and Lyft Partnerships

Here are some of the main Uber and Lyft partnerships. This isn’t a full list but it does encompass the variety of partnerships that have been formed to date.

About PSTA: The Pinellas Suncoast Transit Authority is the public transit provider for Pinellas County, providing more than 14.9 million rides per year. PSTA operates nearly 40 bus and trolley routes with a fleet of 210 vehicles.

In February of 2016, the PSTA partnered with Uber and United Taxi to launch Direct Connect, a program that provides easy access to bus stops in an area that is about 15 square miles. 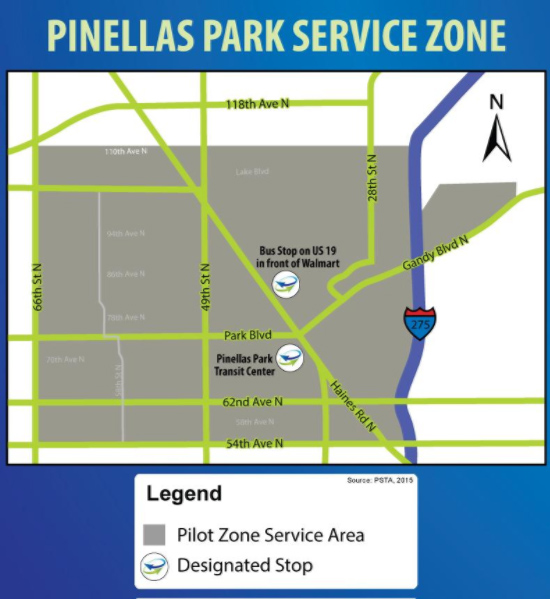 As you can see, there are two designated stops within the service zone, and here’s how the program works:

If all of the above conditions are met, PSTA will pay half the fare, up to $3 per ride. This subsidy can be applied by entering the promo code ‘PSTA’ into the Uber app and then selecting the PSTA option under UberX when a rider requests a ride.

This program is clearly subsidizing first and last mile travel (travel to or from a bus stop/hub/etc) since it requires riders to start or end a trip at the hub and is only available during commuting hours. The partnership with United Taxi might seem strange, but it provides a way for people without a smart-phone, credit card, etc to call in and request a ride.

In August of 2016, Uber and the PSTA launched TD Late Shift, a program that lets economically disadvantaged riders request up to 23 free rides per month in-between the hours of 9 pm and 6 am, as long as they are within county lines.

This sounds like a great program that benefits people who need it most, but I don’t know how many people making $17,655 a year can afford a smart phone and will actually be able to utilize a program like this.

This partnership was a one-time thing in the summer of 2016, specifically during Comic-Con and the MLB All-Star Game, that gave riders a single use coupon code for $5 off an UberPool trip to/from any MTS transit center. The goal here was to subsidize first-last mile travel but also to alleviate the intense traffic that’s often seen during big sporting events and conferences and make parking easier.

The only problem I see with these types of promotions is that many MTS stations aren’t designed to handle high spikes in traffic. I’ve taken the MTS trolley line home at the end of a Chargers game and there’s often an hour wait to get on a train – not much UberPool can do about bad station design.

About SEPTA: SEPTA is the major transit provider for Philadelphia and its suburbs and is the 6th-largest U.S. rapid transit system by ridership, with about 306.9 million annual unlinked trips. It controls 290 active stations, over 450 miles of track, 2,295 revenue vehicles, and 196 routes.

In May of 2016, SEPTA launched a summer pilot program with Uber aimed at increasing access to the transit system. Uber rides were discounted by 40 percent to-and-from 11 suburban Regional Rail stations, with a maximum discount of $10 per ride. The stations selected for inclusion in this pilot program are among SEPTA’s busiest, with high ridership and limited availability of parking spaces. Uber will also provide data on usage and distance traveled to SEPTA on a confidential basis

A lot of the press material around this partnership really re-iterated the parking struggles at the SEPTA hubs, which is another aspect of first and last mile travel. Not only do these partnerships have the potential to increase ridership for transportation utilities, but they could even alleviate parking problems.

About: Altamonte Springs is a suburban city in Seminole County in the State of Florida, which had a population of 41,496 at the 2010 census (Wikipedia).

In March of 2016, the city of Altamonte Springs (why is Florida so hip when it comes to transportation?) partnered with Uber to offer a 20% discount on ALL rides within the city limit and a 25% discount on all rides to/from the city’s commuter rail station (SunRail).

Where I start to question these partnerships is when cities are subsidizing all rides within city limits since that could have some unintended effects. As an Uber driver, we know that the cheaper fares get, the more rides people tend to take. So a 20% city-wide discount could effectively be incentivizing taking an Uber over other modes of transport like biking, walking, etc. And that would go against the mission of these partnerships in the first place: reduce congestion, increase ridership, ease of use, etc.

About: Centennial is a suburb outside of Denver with a population of 107,000.

In August of 2016, the city of Centennial announced a partnership with Lyft that would fully subsidize all Lyft Line rides to/from the Dry Creek Light Rail Station. To be eligible, rides must be on Lyft Line during commute hours: 5:30 AM-7 PM, Monday through Friday and be within the eligible service area.

Although Centennial is a small city, it is the first partnership that fully subsidizes first-last mile travel. I don’t see how this would be sustainable since the cost of a Lyft Line ride is likely more than any revenue generated by a light rail ticket, but it will be interesting to see how many more people opt for public transportation when the first-last mile part is completely free.

How do Public Transportation Authorities Benefit From These Partnerships?

Unlike an Uber or Lyft, public transportation authorities exist to provide services to the public and not necessarily to turn a profit. But like a private company, they still have budgets, ridership numbers and business goals to meet.

If you noticed from my research, a lot (PSTA, Altamonte and Centennial) of these partnerships are happening in the smaller cities. And there seems to be a strong positive correlation between the smaller the city and the more involved the partnership is, which makes sense. You wouldn’t expect the New York City MTA to do a huge partnership with Uber because it could cost them tens of millions of dollars, and we really won’t know exactly how these partnerships will play out for years to come. But you can bet that they’re definitely watching and some (MBTA and SEPTA) are even jumping in on the action.

So how do big and small authorities benefit from these partnerships?

Small Authorities Can Save Money But At What Cost?

The biggest benefit for the smaller authorities in my mind is going to be the potential monetary savings. Altamonte Springs doesn’t have anywhere near the budget of a Los Angeles Metro, so replacing just a single low-use bus route could have a big impact.

Getting rid of bus routes though brings up some interesting issues around accessibility and equity. There are no wheelchair accessible vehicles (WAVs) on Uber in Altamonte Springs, so if the city were to get rid of this option, they’d be discriminating against people with disabilities. And what about people who can’t afford to have a smart phone? They’d also be left out in the cold by a partnership with Uber and Lyft, so the city would then be putting people lower on the socioeconomic scale at a disadvantage. Also, give me a break if you think a low-income resident can afford to call a taxi for a ride (even if it is subsidized).

This is why authorities big and small will have to think about the pros and cons of replacing routes with rideshare. It’s going to be tempting financially, but they’ll need to figure out how they can serve the population that doesn’t have access to a smart phone or how they’ll work with an Uber to make sure WAVs are available before they start cutting bus routes.

There are a few fringe benefits for big transit authorities from partnerships with TNCs, but a lot of it boils down to smoother operations:

All of these partnerships are really about getting more people onto transit and out of their personal cars to reduce highway congestion, and overall wasted hours in traffic. So whether it’s subsidizing rides to/from transit hubs or apps that let you route a combination of public transportation and rideshare options, the crux of these partnerships is the first-last mile.

The challenge lies in the details of these partnerships though. A 100% first-last mile subsidy in Centennial sounds great, but that model could convert all the people who were biking or walking to stations into rideshare users.

And in a place like New York or Los Angeles, that could lead to massive congestion since now you have way more cars on the road.

But on the opposite end of the spectrum, a 20% subsidy on a $10 Uber ride might ($2), might not be enough for riders to opt for public transportation. I think there’s real potential benefit for cities to increasing ridership through these partnerships but they’ll need to make sure that the right incentives are in place.

Uber’s already competitive with certain modes of public transportation on short distances, and there’s no doubt from my experience as a driver that more people are opting for rideshare over other modes of transportation like walking because the cost is so cheap. That’s why it’s important to have third party researchers like those at Innovative Mobility looking at these issues. Ultimately, more riders is great, but you really need the right kind of riders.

Uber has often promoted the value of their service when it comes to working with public transportation, specifically touting the number of trips that start/end at transportation hubs (although I’m waiting on third party verification). But I don’t think increased ridership from first-last mile trips are what they really care about. The majority of trips in this country are made by car, and Uber is much more concerned with that slice of the pie than the much smaller transit slice.

The average cost to own and operate a vehicle is $9,000 a year and with close to 200 million passenger vehicles in the US alone, you can see why Uber is after this trillion dollar market. If Uber can reduce consumer dependency on personal vehicles, that opens up a whole new market to them. But getting consumers to ditch their car in favor of Uber isn’t a cost-effective solution yet in most cities (not to mention the large mental hurdle). That’s why it makes so much sense for Uber to partner with public transportation since the latter can shoulder some of the load and ease the transition for consumers.

As long as Uber still has a driver in the car they have to pay, there’s only so much they can do to reduce the cost of the trip. But if Uber can make it easier for passengers to take public transportation, you could see why a combination of Uber and public transportation is such a good thing for them.