The New York Public Transit Association (NYPTA), which represents over 100 transit systems across the state, today called for an annual investment of $100 million to meet transit infrastructure needs of upstate and suburban downstate transit systems.

The need for upstate infrastructure funding to balance the announced aid package for the MTA has been in the news over the past few weeks. NYPTA testified today that any state plan to fund transportation must also include adequate support for upstate and downstate suburban transit systems.

“The Governor has committed to providing $8.3 billion to fund the MTA capital program,” said Carm Basile, President of NYPTA.  “We applaud that action and encourage the administration to commit to providing appropriate funding to the rest of the state’s transit systems.”

New York transit systems need approximately $1 billion in infrastructure investments over the next five years with more than 80% slated for state of good repair improvements to core infrastructure.  At current funding levels, the resources currently available to transit systems from all levels of government will meet less than half of this need. 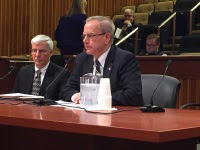 “There is an urgent need to invest $500 million over the next five years to improve transit infrastructure upstate and in the downstate suburbs to support the growth of our communities,” said Bill Carpenter, Vice-President of NYPTA, who testified today before the Assembly Standing Committee on Transportation. “These systems together would rank as the 7th largest transit system in the nation, ahead of major cities like Boston and Philadelphia and the demand for our services continues to grow.”

Transit ridership is growing across the state and customers and the business community are demanding more and better service. Transit services across New York State are an important component of the regional transportation network and critical to the economic growth of communities. More and more, people are using transit services to get to work, stimulating the economy and improving the quality of life in communities across the state. The mobility choices provided by transit systems connect people to jobs, businesses, education, recreation and health care.

NYPTA recommends a state investment of $100 million per year in upstate and suburban downstate transit infrastructure, which will allow these systems to modernize aging infrastructure and continue to meet the growing demands from customers.

These are unprecedented times for our industry. The U.S. Center for Disease Control and NYS Governor Andrew Cuomo's office are issuing daily updates on requirements and recommendations regarding social distance, actions to stop the spread of the virus, and more.

Each transit agency is taking necessary precautions for employees and for the communities they serve. As we navigate uncharted territory, we ask our members to update us to any changes in their transit services. The following transit systems have made changes:

Here are a few additional resources:

New Yorkers for Better Public Transit is a coalition of people from all corners of the state, representing a variety of interests, who want to see greater investment in New York’s public transit systems.