The New York Public Transit Association is a forceful champion of public transportation. “We’re stronger than we’ve ever been,” says Frank Kobliski, Executive Director of Centro and a past two term NYPTA president, “everybody’s in, from Long Island to Niagara Falls.”  Kobliski says the 2013 Transit Advocacy Day at the State Capital was proof. “They heard us better than they’ve ever heard us. People paid attention.”

NYPTA has built an impressive track record. It has won battles for public policy and safety.  It is the voice of the message for moving the industry…and the State…forward. It offers a diverse menu of services and support to its members and is ready to lead the way to cleaner air, more convenient commuting and safer roadways for all New York communities, large and small.  With changing demographics, and more young people moving into urban areas, Hilary Ring believes “As public transportation becomes even more important to people, NYPTA becomes more central to the discussion.” Current President Carm Basile says it’s well positioned: “We have an engaged membership of people who are passionate about what they do.  We have a great relationship with (NYS) DOT and a cause that resonates with the public. We’re in great shape to see that New Yorkers keep getting the kind of public transit improvements they deserve.” 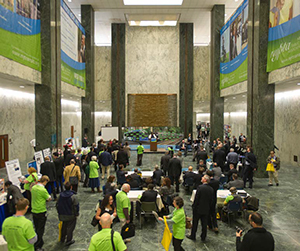 The growth of any organization is a function of the vision, dedication, intelligence and work ethic of its people.  The story of NYPTA is replete with professionals who devoted their lives to the transportation industry and the people it served.  Some have gone on to serve in transportation leadership positions at the state and federal levels of government.  Founding member and past NYPTA President Joe Boardman spent eight years as Commissioner of the New York State Department of Transportation.  In 2005, President George W. Bush nominated him to lead the Federal Railroad Administration and in 2008 Boardman became the President and CEO of Amtrak.

Karen Rae’s career followed a somewhat similar path.  She managed transit systems in Glens Falls and Buffalo, served as NYPTA President (1992-1993), was named Deputy Secretary for Local and Area Transportation in the Pennsylvania Department of Transportation and served as Deputy Commissioner of Policy and Planning at NYSDOT. In March of 2009 the Obama administration named her Deputy Administrator of the Federal Railroad Administration. In 2011, she was recognized as Woman of the Year by the Women in Transportation Seminar.  Later that year, Rae returned to New York as Deputy Secretary of Transportation in the office of Governor Andrew Cuomo.

Another notable story is that of the late Peter Cassels.  Starting as a janitor with the Third Avenue Railroad/Surface Transit in New York City, he used a solid work ethic and innate leadership ability to rise through the ranks as mechanic, foreman, assistant supervisor and supervisor.  By the time he retired 31 years later, Cassels was general superintendent of surface transit.  He was a man of influence, and left his mark on his transit colleagues, his NYPTA colleagues and the transit industry.

There are many more who proudly served NYPTA; some in the Hall of Fame, others destined to get there.   Joe Boardman’s reflection on the early days really speaks to the entire 30 years: “We had good people.”

NYPTA is pleased to once again bring the transit community together on Tuesday, March 10 in support of a unified message on the importance of a strong state investment in public transportation. Join transit managers, New York State business representatives, riders, transit labor representatives, members of the environmental community and other transit advocates.

The day will begin with a breakfast and panel discussion at the Albany Renaissance Hotel, followed by meetings with legislators. REGISTER TODAY to help spread the word that investing in transit benefits New York State, creates and sustains jobs and supports our economy!

New Yorkers for Better Public Transit is a coalition of people from all corners of the state, representing a variety of interests, who want to see greater investment in New York’s public transit systems.