Edward (Ed) Gallagher Served as regional sales manager for American Seating Company for 35 years. Ed Gallagher's career will best be remembered for the "old school" friendship and collegiality he brought to all his business and personal relationships. Ed made it a priority to know NYPTA members and treat all his customers, no matter how large or small their transit system, with the same warmth, friendliness and unique customer service. Because he traveled the Northeast, Ed brought and took news from and to transit professionals throughout New York, New England and Pennsylvania. Ed understood the transit industry and worked with providers to solve problems and succeed. Ed was active in NYPTA as well as the American Public Transit Association, New England Public Transit Association (NEPTA) and Pennsylvania Public Transit Association (PPTA). Ed Gallagher was a consistent and powerful supporter of NYPTA, active in the Association's advocacy programs, corporate training and presentations, technical support groups and corporate committee work. Ed passed away in December 2003 after a long battle with cancer. He remained active in the transit industry until the end, leaving a great legacy of respect and loyalty. He was inducted in 2009. 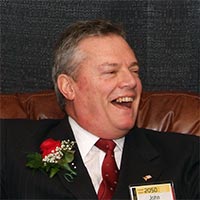 Began as director of Oneonta Public Transit (OPT) in 1986. At that time, OPT was a demand response service with an annual passenger trip total of approximately 40,000. As Director, John transformed the system from its demand response service to a fixed route service with an annual passenger trip total of approximately 700,000. In addition to reforming the system's transit services, John instituted a policy to provide transit service to regional shopping centers. OPT's storage and maintenance facility expanded from a two-bay building to a ten-bay building with in-house bus washing. Oneonta Public Transit is the only transit system in the country which has not raised its original base fare. John has been an active member of the NYPTA Board of Directors since 1986. His first assignment was to work with then NYPTA President Joe Boardman to change the bylaws to recreate NYPTA from an upstate small systems association to one that included all transit agencies and authorities in New York State. During this period every large property, including the MTA, became an active member of NYPTA and a strong statewide voice for public transportation. John served on the legislative, finance, development, insurance and bylaws committees. In addition to his involvement with NYPTA, John was a member of the original NYSDOT RTAP Advisory Committee and remained an active member of that committee until his retirement earlier this year. Famous for his line "I feel strongly both ways," John is a strong leader and friend to New York's transit industry. He was inducted in 2009.